Episode 644: Another Underhanded Shot at Hunting as U.S. Bans Import of Ducks/Geese Killed in Canada & Should We Intentionally Infect Axis Deer With CWD?

Episode 644: Another Underhanded Shot at Hunting as U.S. Bans Import of Ducks/Geese Killed in Canada & Should We Intentionally Infect Axis Deer With CWD?

After hearing through the grapevine that Texas Parks and Wildlife could be intentionally infecting axis deer with CWD I figured we had to do some digging. Longtime Exotic Wildlife Association Executive Director Charly Seale was happy to join the conversation and shed some light on what exactly is going on with the situation. To date, axis deer (native to India) haven’t ever tested positive for CWD, so is purposely infecting a species with the disease really a good idea? We discuss.

Next it’s a roundtable discussion with international hunter and passionate waterfowler Ryan Bassham and journalist Gabriella Hoffman of the District of Conservation Podcast. We dive into the wildly misguided ruling from the Animal & Plant Health Inspection Service (APHIS) to ban the importation of ducks and geese into the United States that were legally taken by American hunters in Canada. What scientific data could possibly warrant the closure? Is it an underhanded attack on hunting? What should we do to get it overturned?

Plus, Ryan fills us in on his favorite destination waterfowl hunting opportunities both domestically and internationally. We also look at the potential impact the closure would have on Canadian guides and outfitters who rely on nearly half of their business coming from the U.S.

UPDATE: Due to public backlash and comment – APHIS has reversed it’s ruling! Big win for hunting and conservation. 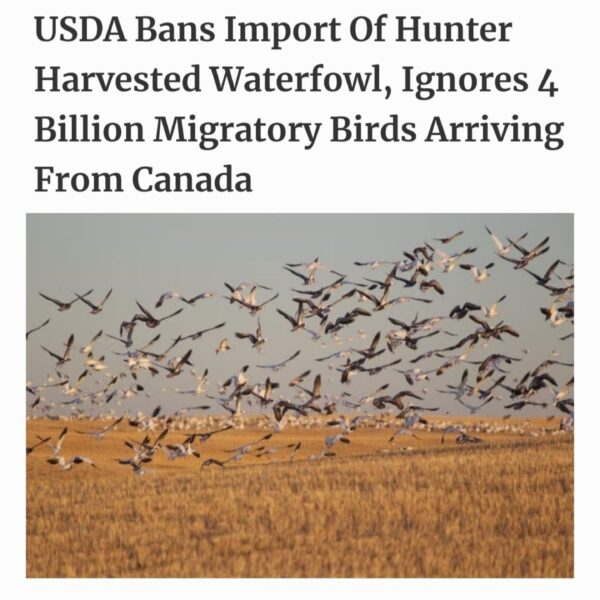