Sometimes hunters don’t do the right thing. Sometimes they intentionally break the law, knowing full well what they’re doing (those are poachers btw). But, that wasn’t the case with Kiel Peterson. The relatively new bow hunter was chasing whitetails in the Sam Houston National Forest this fall when a once in a lifetime opportunity presented itself in the form of a trophy red stag. Knowing how Texas Parks and Wildlife views all exotics and invasive species, Keil let an arrow fly.

What Kiel didn’t know is that the National Forest doesn’t share TPWD’s management plan of no closed season, no bag limits, just ‘shoot on sight’ when it comes to exotics philosophy. Ultimately, game wardens were alerted of the situation once it when viral on social media and they were forced to confiscate Kiel’s stag. Did he break the law? Yes. Should he suffer the consequences? Yes. However, that doesn’t excuse the fact that the law is antiquated and literally flies in the face of how we manage invasive species. It won’t get Kiel’s stag back, but hopefully this conversation sheds some light on the reality that not all game laws are good laws. Turning honest hunters into ‘poachers’ (and I use that word loosely in Kiell’s case because as you’ll hear, he clearly didn’t intentionally do anything wrong) is something our wildlife management agencies should look to avoid at all costs.

(Kiel and his stag)

Next, I drag Henry into the studio to revisit our epic long weekend at deer camp over the Thanksgiving Holidays. From predators, to hogs, JoJo’s first duck hunt and an old 8 point buck, we had ourselves one hell of time enjoying the outdoors together. Temps were in the low 20s at night and we were tent camping. I have to give the boy credit, he never complained and balked when the alarm went off at 4:30 every morning. We’ll see how much I can pry out of the somewhat shy version of myself during this conversation. Either way, it was a trip neither of us will ever forget. 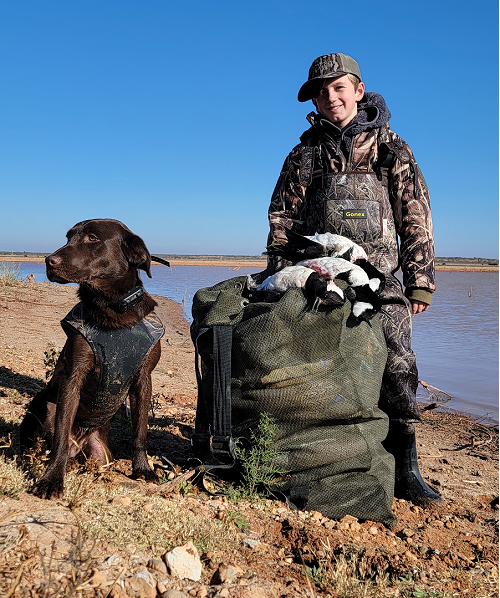